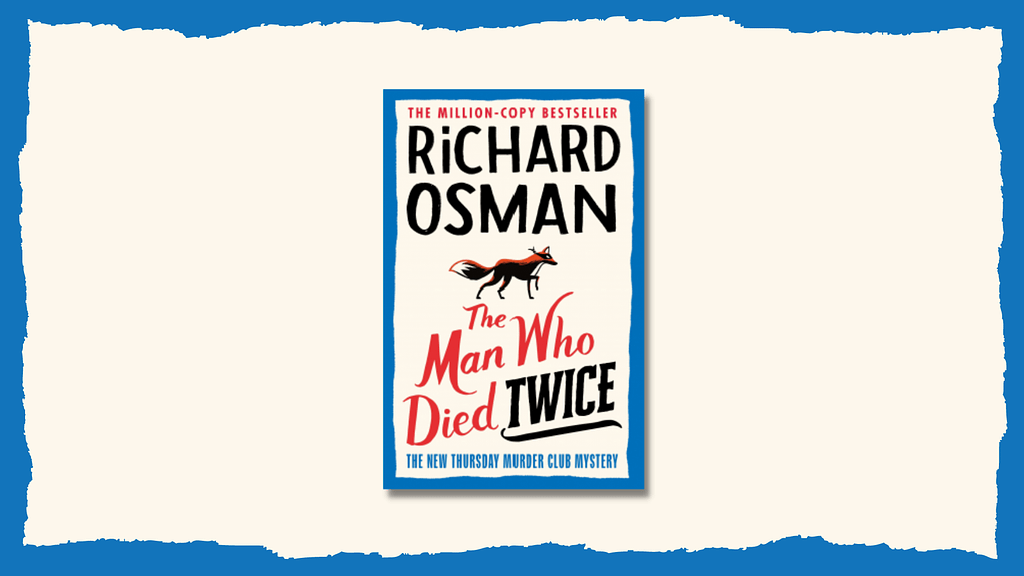 The perfect book to escape shitty reality. The dose of humour we all need right now. Read it.

I bought the Thursday Murder Club from Goldsboro Books purely because it had foxes on the edges. Literally judged a book by its cover and then it lived on my shelf.

I regret not reading it sooner.

HOWEVER, it meant that I was closer to the sequel coming out so the sadness was shoved to the side pretty damn quickly.

In a nutshell: if you loved Thursday Murder Club, then you absolutely need to get The Man Who Died Twice. It’s more of the same and let’s face it – we all need a stupid, chaotic and downright daft story these days. Here’s what you’re in for:

Elizabeth’s ex-colleague turns up. Who also happens to be her ex-husband. Who was also supposed to be dead, so that throws a bit of a spanner into the works. Turns out the wee lad is in a big ol’ pile of shit because of some sparkly stones and is in desperate need of her help.

Whilst that’s going on, there’s also a double murder to solve as well as a mugging, a dabble on Instagram and a drug overlord. Basically, these old-timers have their hands full which is handy ’cause they ain’t got much else to keep them busy these days.

This will be a short review for the main fact I refuse to give away any more of the plot.

Whilst this is very much a wonderful sequel to the first book, it’s another page-turner that you won’t be able to put down.

HOWEVERRRRR – This book probably won’t be for everyone – its humour is drier than the Sahara and some plot lines are so out there that you’re just like what the fuck was that. But you know what? I really don’t care. We live in a world that’s not a lot of fun right now and I need a bit of chaos via a book to brighten it up.

And why is it called The Man Who Died Twice? Click this spoiler box if you really, REALLY want to know:

SPOILERS LIVE HERE!
The title is perfectly done. Whilst it peppers throughout the idea that Elizabeth’s ex-husbando was the chap who kicked the bucket twice (he was known to fake his own death), it has a much, much sadder connection.

This is about dementia.

Something that’s rife throughout the older community. People with dementia tend to die twice – once when dementia kicks in and then again when they pass. The ending is like a gut punch.