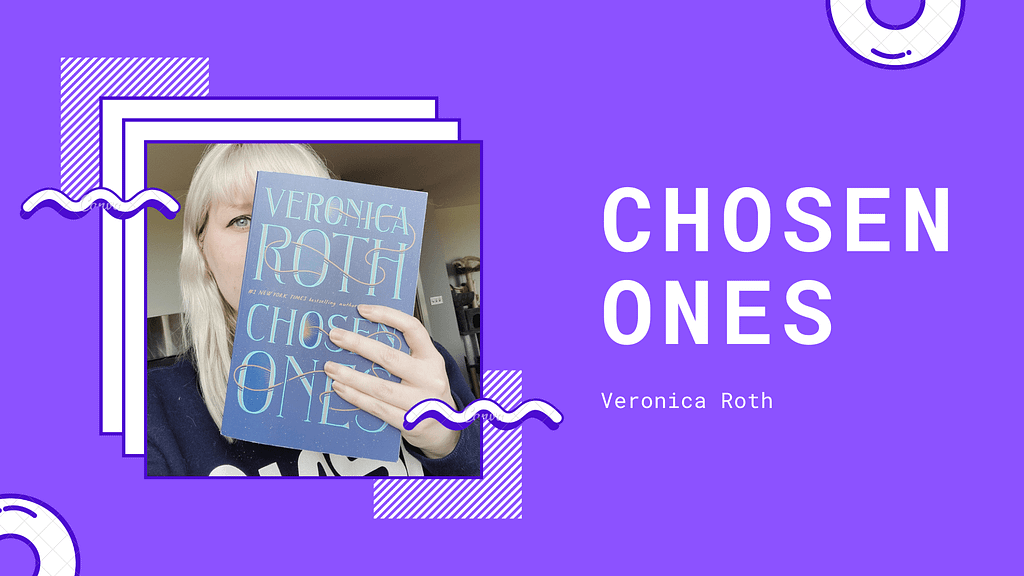 I was sent this book by the wonderful people from Hodder & Stoughton. I will always be honest about a book no matter if I pad for it or not.

Magical alternate dimensions with baddies that leave you with conflicting feelings. Strong lead character. Makes you regret being born on this stupid planet and not with magic. Thank you to @hodderbooks & @vrothbooks for the ARC!

Gather round boys and girls because I have a confession – I have never read any of the Divergent Series which after a quick scout around on Google/Goodreads meant I was some kind of monster. Brushing past all of that, I went in blind for my first Veronica Roth book.

Now if you do judge a book by a cover, Chosen Ones isn’t something that would normally catch my eye. In fact, it reminds me of my oh-so-creative high school doodling years where I insisted on colouring in all the circular shapes of words on any sheets that were handed out much to the annoyance of any teachers who had to try and get my attention.

Anyway, once you’ve got past that, you’ll find yourself in a world where these five people – also known as the Chosen Ones – are already the heroes. They’ve already done the amazing things that thrust them into the spotlight. And they most definitely already have a very, very intense history. Needless to say, it got me intrigued – you have very little detail on what happened other than it was very, very shit and traumatic as hell.

It’s like a Harry Potter book once they kill Voldemort — what do the heroes do once they’ve killed their arch-nemesis? Kick back and relax. Let the good times roll.

Right, onto the characters.

My main lady, Sloane, isn’t your typical heroine. She’s struggling with life whilst her friends around her seem to be flourishing and, to be honest, I’ve never related more with a character as I have with her. Well, you know, without all the magical bits and shit.

Sometimes Sloane wondered if the world had been worth saving

The other Chosen Ones… I almost forgot about. It’s not a bad thing – I just found them to be people I’d personally hate to be around which is probably why I ain’t got no time for them. Mox on the other hand… Read it you’ll see what I mean. Real nice guy. The kinda guy that you’re just dying to know more about.

Here’s my only complaint: I found myself losing the plot. It’s very easy to read with short chapters (you have short chapters in our book and I, along with my short attention span, will finish it), but I found myself going back to reread bits that I just hadn’t grasped. To add to that, it was a slow build-up to what felt like a short ending. Whilst I went into this knowing it was the first of however many (?) Roth will write, I just needed more details. Ultimately, I’d been well and truly hooked into this weird little world.

This is an adult fiction book that reads like a young adult and that’s absolutely not a bad thing. In fact, if someone could make up a new genre meshing the two, I’d be all over it. It’s full of twists (some you’ll see coming and others that will sideswipe the fuck out of you) and it might end up leaving you feeling a little guilty at the end once you realise what’s going on.

TL;DR: Magical alternative dimensions with baddies. Strong lead character. Makes you regret not being born on an alternate universe (I’d be damn good with those siphons).

The Chosen Ones will be released on 7th April 2020.