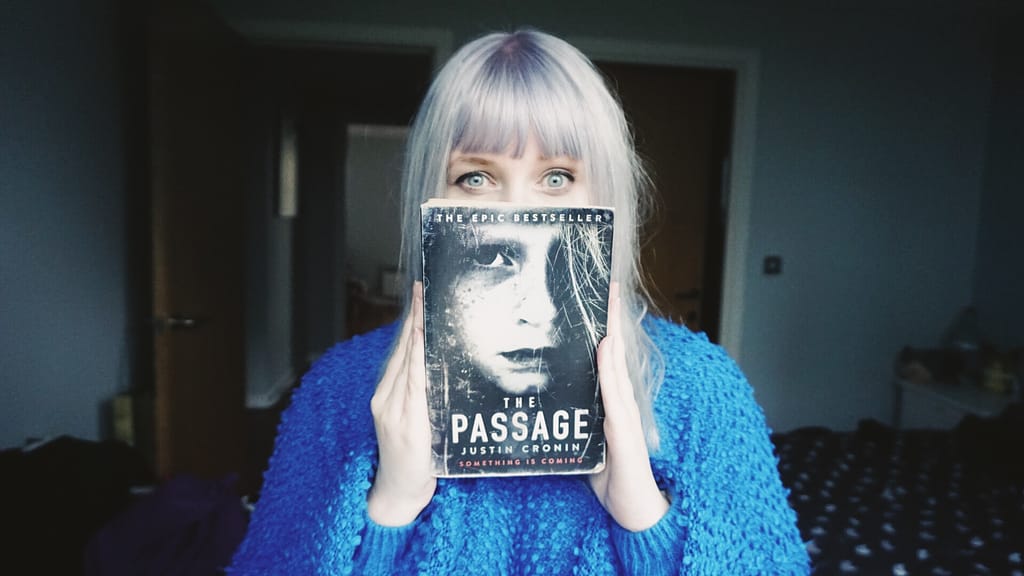 I’ve got two words for The Passage: book betrayal.

TLDR;
Characters you’ll probably hate, full of waffle, but a pretty front cover if you happen to buy the one with the holograph. Can also be used as a weapon or a way to smash a window.

I wanted to love you (I really, really did). You had everything I like in a good read – a pretty holographic cover, a post-apocalyptic setting and a twist on the traditional vampire take. It should have been perfect.

But given that it took me over a year to finish (that pretty holographic cover taunted me from the bookshelf), I’m going to go on a limb and say that it’s a bit like farting in a submarine. You get the instant gratification of letting it out, but the unfortunate smell will haunt you for a while to come. In hindsight, it probably shouldn’t have been the first book I jumped back into after years of hiding from novels, but it’s one of my good friend’s favourite books and who was I to doubt her? I’ma go with this was just a temporary blip in her otherwise stellar recommendations.

So why did it cause so much pain? Let’s start with the very first thing you’ll notice if you grab a physical copy. It’s fucking huge. Do not pick this book as something to travel with unless you’re using it for personal defence or for an arm workout. Get the Kindle edition.

Ok, so fine, I can’t hold the size of it against it just yet. I’ll come to why this is a bad thing in a minute, so here’s my main gripe with this book in the meantime – it feels massively disjointed and is basically split into two stories. The first third of this book, you’re given these excellent characters – which you’ll quickly get attached to – and you can actually imagine/picture their lives in head. I was invested in their story, their lives and, ultimately, I was excited for what the rest of the book might hold for little Amy, Agent Wolgast and Sister Lacey. I was ready to keep these endearing and heart-warming characters close to my cold, dead heart.

And then they’re gone. Poof. Just like that. Your attachment and commitment has just been ripped away from you and stomped on whilst the remainder of the book starts to develop into something completely different.

Enter a selection of lacklustre and uninteresting characters (who insist on saying ‘oh Flyers, I am mildly inconvenienced‘ instead of *just* dropping an f-bomb. WHHHHHYY?!) which left me glazing over chapters instead of absorbing every word. I didn’t care about them and, realistically, why should I? They’d been plonked in front of me and I kept flicking through just in case the depth of the development the previous part of the book dedicated to the characters might show up, but it never came. I thumped the book on the floor and glared at it for months. Other people on the Internet couldn’t be wrong, could they?
Maybe I just didn’t get it…?
Maybe, just maybe, there would a saving grace at the end.

There was no saving grace. Those 766 pages lead to a cliffhanger. I’d been set up for another book; another book which was even longer than this one which also set up for yet another book. All I had to show for it was a large amount of disappointment and a whole bunch of characters I’d happily fling to the baddies myself.

Ok, ok, I’m being slightly unfair here. O thing I’ll give this book is how Cronin has dealt with the done-to-death-and-absolutely-everywhere zombie vampire thing. Those little scamps were creepy as shit and there seems to be genuine terror inflicted by the Virals on the oh-my-god-I-hate-every-one-of-you humans. Which is nice, I guess?

Oh, and I still have no idea where the passage actually was or what it was in reference to ????