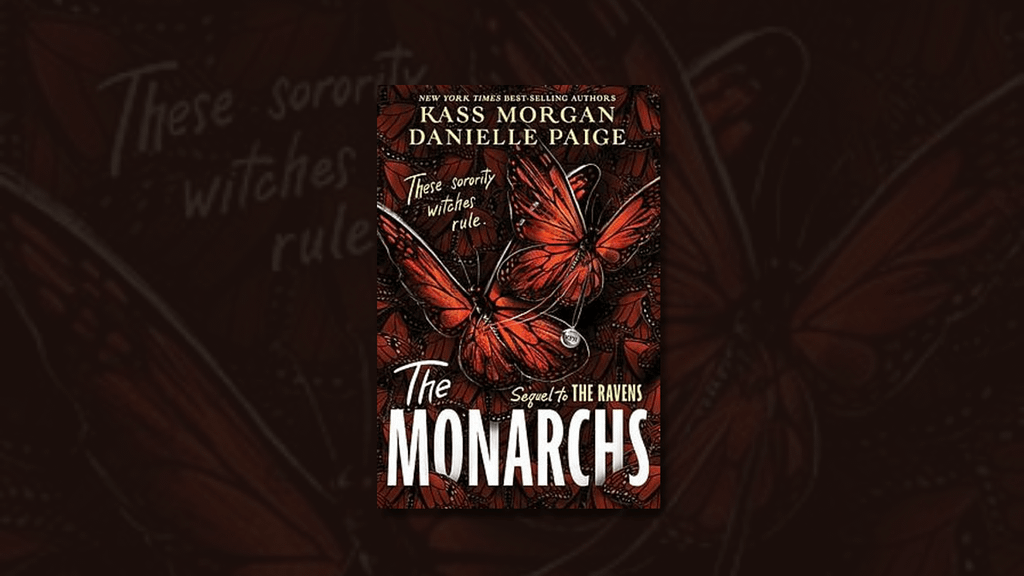 A bit grey in a world that should have been filled with beautiful, colourful magic.

Right, if you’ve got this far and you HAVEN’T read The Ravens, then I highly recommend you stop as you pretty much need the background deets to have a clue what’s going on with this book. If you have, well hello! Keep going. Ta.
Here’s what you’re in for with The Monarchs:

Given that the last president went a little bonkers, plotted against the entire sorority and ended up very dead, I imagine normal people might shy away from that position. Not Scarlett. She’s worked hard for this and it’s what her family does so there’s no way in hell she’s going to give up this opportunity no matter the risks. Armed with her sisters and her newly appointed and 100%-out-of-her-depth Social Chair, Vivi, she had that power complex swooshing through her veins.

But you know… Sometimes risks just ain’t worth it.

Things start going tits up pretty quickly. And when I say things, I mean the one thing they love more than themselves: magic.

Whilst all of this is happening, rival sorority and non-magic-wielding gang, Theta House, are ramping up their efforts to steal the elusive Spring Fling from them, The Monarchs (the matriarchs and stuck up bints of the witch world) are meddling because won’t anyone think of their reputation and Vivi discovers she has a half-brother so chaos is the overarching theme here.

Given how much I loved The Ravens, I was so unbelievable ready for the sequel. Yet this just didn’t quite land for me. My main love, Vivi, faded a little into the background, made really, REALLY dumb mistakes and all the progress with her confidence seemed shattered.

Scarlette and Jackson’s relationship fell a wee bit flat. And the only other Raven I can really remember is the one that could change her appearance through glamours. Everything was just a little… grey?

Basically, my expectations were insanely high from the first book and that’s probably on me.
That being said, this would make a banger of a TV show.

Did I love this book? Not particularly.
Would I buy another book by these authors? Absolutely.