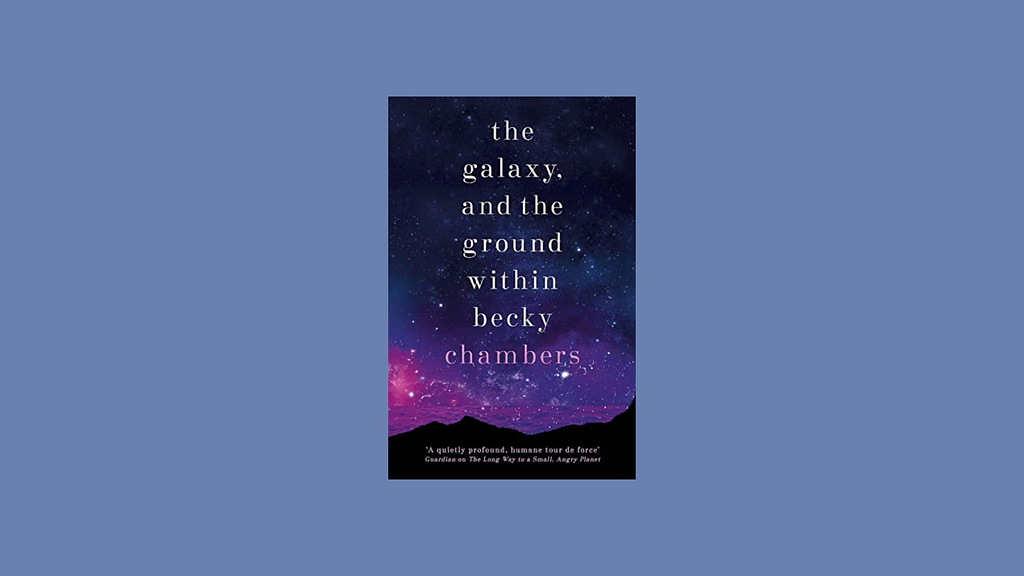 Eejit over here (hello) decided to read the LAST book in a four-part series without touching the others and, needless to say, was a little confused as to what the fuck was going on. But because I’d seen the amount of love the Wayfarers books were getting, I was like oh hell yes let’s just run in with no context see what happens.

I was not prepared.

At first, I thought this might be a book about space furries. Cool, I could get on board with that, but I quickly realised that I was being an utter fanny and this was a book about bloody space aliens. Of course it was going to include vastly different looking species considering they were ~ floating ~ about up there. You know… in space. I’ve clearly read too much historical (and very human) fiction – time to wiggle my way into a whole new world.

Also, a wee PSA:
This book uses gender-neutral terms for one of the species. As I’ve not come across these before, it took me a bit of time to get my head around it but after about an hour, it became second nature. You’ll find Xe and Xyr throughout to describe Tupo – a delightful wee character who’s gender isn’t determined until later in life.

To cut to the chase, I’ve not read anything quite like this. Here’s what you’re in for:
✨ Space aliens. A lot of them. Each with their own unique cultures and needs
✨ Clashing opinions with no escape from each other
✨ A story with no plot (I’ll explain this later)
✨ A story that’ll stick in your mind

As I’ve not read any of the other three books, I was a little lost as to what was going on at the start. Now this can absolutely be read as a standalone but I am most likely missing a lot of character buildup so if you’re thinking of doing a Jen and jumping in at the end, stop. Go read the rest first.

The story’s set around four main species and their plinky, plonky planet-based shenanigans as they find themselves unexpectedly stranded at what I can only describe as space motorway service stops but on a much grander scale.

The Five-Hop One-Stop on Gora is home to Ouloo and Tupo – a fluffy species known as the Laru of which I now have in my head as looking like an Arcanine from Pokemon. Determined to make the extended layover a bloody delight, Ouloo goes into over drive to accommodate her guests.

Her guests consist of Roveg, a Quelin artist who creates simulations and has Scyther vibes. Pei – an Aeluon who changes colour depending on her mood and Speaker, an Akaras bird-like creature who stomps around in a mech suit as they can’t breathe the same air as everyone else. For this I have images Big Bird in a Dr Robotnik robot. All of these wonderful characters have stories to tell. They just need to be comfortable to tell them – thanks to the ol’ stranding issue, they’ve got plenty of time to get to know each other.

So that plot thing I mentioned earlier? It’s not really there. And this isn’t a bad thing – it just caught me off guard. I’m used to manic stories that raced from here to there however this… this felt nice. Relaxed almost. I was seeing different species covering topics from gender, race, exile, culture and xenophobia being played out without a human in sight. It makes you take a step back and think. The complexity of the conversations are wild, but this book just seems to get the points over to you in a wonderful way.

I’ve ummed and ahhed about this book. Did I love it or just I just get sucked into its delightful words? It’s not something I’d normally grab but holy shit has it worked its way into my head. I keep thinking about their relationships and how the non-plot plot crept right up on me. If I could hug all these characters I would and based on my now irrational commitment to the band of misfits, I upped my feelings towards this book.

I’m off to get some JenJen cake (whatever that is…) and catch up on the three books that I missed.

The Galaxy, and the Ground Within will be published on 18th Feb 2021